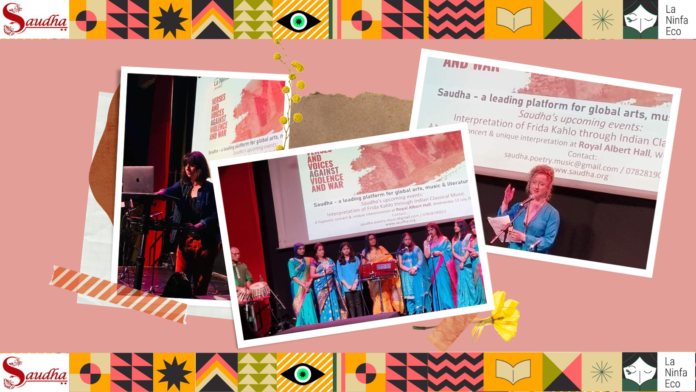 «Land of Silver» A Poetry Collection about Argentina with Writers from Across the World.

52 artists merged at the Rich Mix in East London last Sunday to condemn the ongoing Russian attack on Ukraine and all forms of violences against humanity, currently happening around the world. With four and half hour long performances of music, dance, spoken-words and films, artists from a diverse cultural heritage showed their solidarity with the people of Ukraine and expressed their anger, frustration while the attack is deepening gradually.

Poet and playwright John Farndon, who has been translating Ukrainian rich literature for many years, said: ” This is simply a horror that no-one can just ignore. What can we writers do now against this invasion? The painful answer is not much. And this helplessness is even more depressing.”

A leading South Asian singer Gouri Chowdhury said “Could anyone have imagined a shameless aggression like this in 21 century? These atrocities almost became a TV show now, as if, come and look who has done better coverage on war tonight. Ukraine is burning but it should have burned the hearts of the global community, too, equally and the world should do more to stop this. It has run enough already.”

Poet and theatre-activist Amy Neilson Smith read her poem, with powerful verses ” Our hearts stop/Thoughts of leaking breasts; torn tectonic plates/ as fresh eggs are cracked/cooked & served/ on Putin’s cold plate.” Amy said ” I wrote my poem after being inspired by an old school friend of mine who fly to Ukraine as an aid worker, risking her life to help others; she posted about the bombing in Mauripol & it was the first post that ‘broke me’.

Poet and fictionist Mona Dash ended her beautiful poem with hope – “By now, we know enough, to know, we must stop war! / May the sunflowers bloom, the nightingales sing soon in Ukraine.”

Hosted by Saudha, a leading platform of global music, literature and arts in partnership with a top latin American literary platform La Ninfa Eco, the event featured more than 55 artists altogether with a number of leading  musicians, spoken-word artists, theatre-practitioners, dancers and filmmakers of the city.

Writer and composer Peter Culshaw who has written quite often about Ukraine for Guardian, Songlines, Odessa Review and made a documentary produced by Boiler Room on music groups in Kiev, said, “Ukraine is a special place between a backward looking tired Europe and Russia run by an autocratic psychopath. The invasion was unprovoked as an imperialist fever dream. Putin didn’t mind his neighbours if they were basket cases and corrupt but Ukraine was finally coming into the light as a democratic, free, culturally rich country and had to be stamped on. Ukraine will surely prevail – but at what cost to more innocent people?

“It was an incredible event with a true international mix of a wide variety of performances against war” that’s how Anastasiya Belovoba described the event. .

The director of Saudha poet Ahmed Kaysher said, ‘The event actually showcased the impact that the violence and war has left on artists’ imaginations. This was actually artists’ responses against the current invasion of Russia in Ukraine as well as all forms of violence happening all around the world.

Criticizing the role of US and NATO, BBC slum champion poet David Lee Morgan said, “The Ukrainian people are historically fighting back against a criminal and cowardly Russian invasion”.

Poet Amy Neilson Smith wrote as her review on the event, – ” Saudha’s Verses against Violence and war was a colourfully woven performative tapestry; the rich mix of international acts ranged from traditional Urdu verses & Indian music, Ukrainian folk songs & lullabies & contemporary poetry responses to the invasion by Russian troops. There were tears at moments when the reality of the trauma Ukrainian people were suffering, we very real & sunk deep into the skin through the delicate verses.

She wrote ”The phrases that will stay with me were – drop beats not bombs – from an Asian DJ Isuru Perera  who opened the show & read his very effective first ever poem! And then. – Poetry is the opposite of war – from Stephen Watt; “What do you think you are shooting at? They are people. They are lives!” from a well-known poet of Bengal Sunil Ganguly and recited by Dr Zaki Rezwana Anwar.

She added further “ I loved the energy of togetherness and the message – Art & culture is the only thing that can spread peace everywhere! – that Saudha has passed on. I am sure Saudha’s work & collectiveness are essential, inspiring & using art to conquer war mentality.”